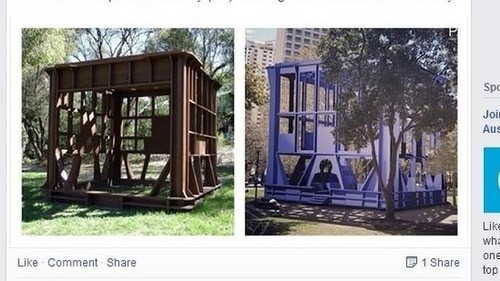 We’ve all “borrowed” a milk crate, but few have borrowed one that stands 13.7 metres.

A public art scandal is brewing with Melbourne artist Jarrad Kennedy claiming there are suspicious similarities between his 2005 McClelland prize entry and Hany Armanious’ Pavilion, the dark blue mega crate the City of Sydney announced yesterday is on its way to Belmore Park.

Kennedy, whose background includes short film, sculpture, painting and drawing, posted both works on Facebook on Tuesday, side-by-side, asking for advice and suggesting legal recourse might be in his sights.

He told Facebook commenters that he would be approaching Armanious directly.

“I was shocked to say the least. Art may be open to interpretation, but precedents dictate that the artwork is in breach of copyright. The artist will receive notice tomorrow,” he said on the social media post.

Kennedy told Fairfax Media he was seeking legal advice and had been told not to comment further at this stage.

If the allegations hold water, they will be a blow to Armanious, who has shown his work internationally including at the Venice Biennale and who is represented by Sydney’s Roslyn Oxley9 gallery.

Fairfax Media is seeking comment from Armanious and the City of Sydney..